Rack-and-pinion gear units and positioning systems from LEANTECHNIK perform at their best even under the most demanding conditions: This is proven by chassis stackers that have been in non-stop use in the baggage control area of a major German airport for twelve years.

The eight systems were specially developed and manufactured for the airport operator. They perform an important task in the security area of the airport: After the staff has deposited the suitcases on so-called transport chassis, they are transported by a conveyor belt to a separate area of the building and temporarily stored on a storage system. Meanwhile, lifting columns from LEANTECHNIK lift suspicious pieces of luggage into a bunker in which pressure conditions similar to those in an airplane prevail at an altitude of about 10,000 meters. Pressure-sensitive bombs can thus be detonated in a controlled manner without endangering people.

If the item of baggage is not dangerous, it is transported onward to loading with the appropriate chassis. Up to 13 chassis can be temporarily stored on the forklifts, each with its own bar or ID code and thus clearly identifiable. The chassis with the cases are lifted onto the deposit system with the aid of a lifgo® linear 5.3 rack-and-pinion gear unit. The gear unit has a maximum lifting force of 15,900 N and achieves lifting speeds of up to 3 m/s and acceleration of up to 50 m/s2. Thanks to its high-quality and robust design, it can lift loads weighing up to 1 t, with the chassis including the case weighing only about 25 to
30 kg. 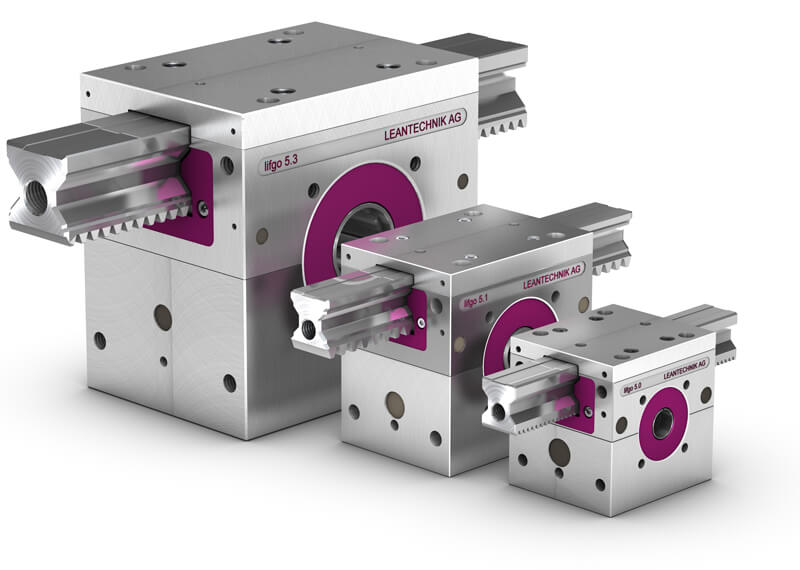 The chassis stackers are a leantranspo® system – under this name LEANTECHNIK offers partially and functionally ready systems that the customer can put into operation immediately. They consist of the tried-and-tested rack-and-pinion gearboxes and the associated steel structure, including motors and add-on parts. Depending on the application, either lifgo® or lean SL® gear units serve as the basis of the systems. lifgo® rack-and-pinion gear units have a 4-fold roller-guided rack and therefore ensure high positioning accuracy, as required for the efficient operation of handling and packaging systems. The lean SL® gear units, on the other hand, feature a round-guided rack and are ideal for simple, synchronous lifting tasks without transverse force absorption. Both rack-and-pinion gear series are also available as a variant with two racks for applications in which gripping, closing or centering movements have to be performed.

Our rack-and-pinion gear units are manufactured according to a modular system and are therefore fully compatible with each other. This means that even systems with many variants can be implemented cost-effectively. leantranspo® systems such as the chassis stacker are suitable for all industries where a buffer is required in production. This includes logistics as well as the automotive or pharmaceutical industry. The systems are designed for decades of trouble-free operation and are practically maintenance-free. This durability also convinced the airport operator at the time.